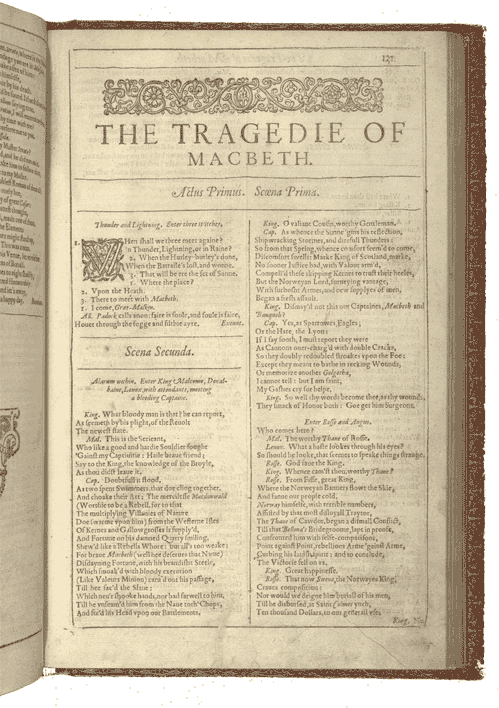 Complete Play with both Common and First Folio Texts

What Shakespeare would have assumed his audience would know and be familiar with.

A non-hereditary title given to men who provided great service to the Scotish King, usually in the military. Along with the title they received lands which, while still belonging to the king, were theirs to manage and from which they derived their income. When the king gave them lands the name of those lands became part of how they were referred to, e.g. if the area was known as Cawdor their title became Thane of Cawdor.

Their wives were referred to simply as Lady.

Not meant as a desert in the modern sense with lots of sand and camels but rather a 'deserted place'.

Witchcraft and witches were real to the people of the 17th century and even more so 600 years earlier at the time the events of Macbeth took place. They were thought to be able to control the weather and even influence the fates of human beings. King James who was on the throne at the time Macbeth was written fancied himself an expert on witchcraft and had even written scholarly work on the subject.

A barren land devoid of human inhabitants usually covered with scrub brush. A place travellers passed through, not a place to live not even briefly.

In the middle-ages countries and Kings were often thought of as being the same. So references to a country's name such as Norway could either refer to the country or its king all depending on the context.

† Search all of KickAss Shakespeare

Macbeth, Julius Caesar, and Romeo and Juliet are the first fully produced plays from KickAss Shakespeare. The full plays with common text, annotations, First Folio text, interactive modern text, links to useful information and many other features are now available.

Seven other plays are presented with the original text from the 1600s side by side with the common text and are in the process of being produced. They are: Hamlet, Merchant of Venice, Taming of the Shrew, Othello, King Lear, Much Ado About Nothing, and Twelfth Night. The others will follow.

† Much Ado About Nothing

† Taming of the Shrew

† The Rape of Lucrece

† The Phoenix and the Turtle

† Does the Internet need
another Shakespeare site?

† Where the text comes from

Tell us what you think, what you know, or what you want to know: